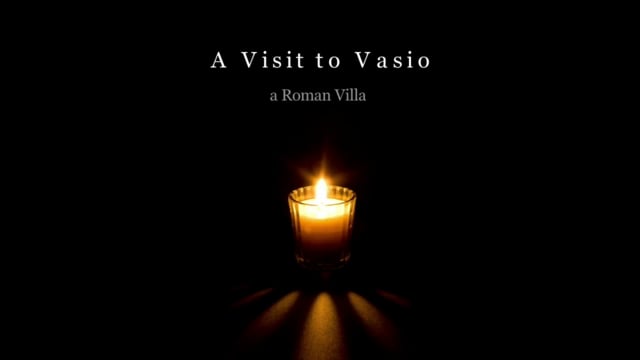 They Were Just Like Us: A Visit to Vasio, a Roman Villa

It is part of the nature of pilgrimage to open to the strange, new land and to let yourself be led.

Peter and I were in a famous Italian cathedral once with a hundred chattering strangers, lying on our backs on the floor, staring up at the marvelous dome. Then a voice came on over the loudspeaker, not in Italian, as one might expect, but in English, saying in a portentious, God-awful voice, “Do you know where you are?”

I feel like that here in Nyons, in Provence, one of the most deeply cultured and known places in the world—except to us. “Do you know where you are?”

No, not really, and we must be led by the thread of intuition and happenstance—as happened on Monday. We had gone out looking for an address I would need on Tuesday for a cooking class. The GPS took us out across the unfolding countryside one little road after another.

After we found it on the outskirts of a town called Vaison-la-Romaine, we stopped at a roadside park for a picnic of brioche, fresh tomato, left over foie gras from the market, the last of the white wine from the night before.

I  correlated the guidebook with the roadside sign I could see from where I sat. “Mt. Ventoux.” So we were off up the 6000 foot mountain, all the way to the top along with thousands of bikers on an organized day of attempting this same ascension as the Tour de France competitors.

Back down later in the day, we first saw a fortress on a hill, then saw it was surrounded by a medieval city—one thing led to the next, and we found ourselves at the Archeological Museum of one of the most major sites in all of 🇫🇷 France.

We had been drawn by circumstance and our own openness to the day to visit Vasio, a Roman villa 2000 years old.

As is also the nature of pilgrimage, I felt for the places of deepest resonance.

The first was the footprint of an infant in clay; in a cave further south in France in 2001, we had also seen a child’s footprints in the clay on the roof of the cave—that tens of thousands years old; this 2000. Nothing could make me feel more intimately connected by the heart than those tiny, beloved footprints.

The seond was walking the ancient, processional way around behind the villa and up the hill to the Roman Antic amphitheatre. At the top, the Romans had dug a tunnel through the hill. Inside the tunnel, niches just the right size for holding clay lamps showed the path had been used at night as well as the day. Inside the tunnel felt like a liminal space between two worlds, a kind of earth-based time machine where I could hear imaginal whispers of the past —and isn’t it imagination that the greatest gift a traveler can bring to a strange land to elevate tourism to pilgrimage?

and isn’t it imagination that the greatest gift a traveler can bring to a strange land to elevate tourism to pilgrimage?