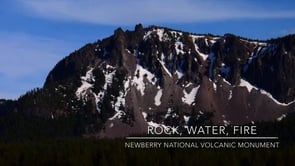 This is a digital story I made for a video competition in praise of Newberry NVM.

Below is a photo essay about a recent trip to Newberry.

What Has George Bush the Elder Done For Us Lately?

In November 1990, Newberry National Volcanic Monument was signed into law by President George H. W. Bush. Over 54,000 acres were set aside and the area was designated a national treasure (well, it already was, but designation is everything if you don’t want it trampled flat by the admiring hordes). Newberry Caldera punches a hole in the top of Newberry Volcano and then a whole lotta land runs down the northwest flank of the volcano 4,000 feet to the Deschutes River.

Newberry has the widest variety of volcanic features of any National Park or Monument. Rock out to your heart’s content at the Big Obsidian Flow, Lava Butte, Lava Cast Forest, Lava River Cave, Paulina Falls, Paulina Peak and two caldera lakes. I love this place!

• Newberry Volcano is the largest volcano in the Cascades and covers a 1,200 square mile area with its lava flows.

• Newberry National Volcanic Monument contains the widest variety of volcanic features of any national park or monument in the U.S.

• Newberry Volcano is considered active and will certainly erupt again either passively (lava Flows) or explosively (ash and pumice).

• The slopes of Newberry Volcano are covered with more than 400 cinder cones and volcanic vents, Lava Butte being the most well known.

• Before the formation of the Caldera, Newberry’s summit was 500 to 1,000 feet higher than Paulina Peak is today.

• Eruptions at Newberry Volcano have changed the course of water flowing in the Deschutes River drainage many times.

• At the point where Lava River Cave crosses beneath Highway 97 the roof of the cave is 50 feet thick.

• Newberry Volcano is considered a very high threat volcano by the USGS due to recent volcanic activity (1,300 years ago), the presence of hot springs, and the 200,000 people living in its shadow.

• The Big Obsidian Flow is the youngest lava flow in Oregon, ash from its eruption 1,300 years ago reached present day Idaho.

• Newberry Volcano is made up of ash, pumice, lava, cinder, and mudflows. It contains over 120 cubic miles of volcanic material, compared to only 6 cubic miles at Mt. St. Helens.

• The term ‘crater’ in the place names Newberry Crater and nearby Crater Lake is a bit of a misnomer. These volcanic features are correctly termed calderas.

We visited recently with Charlie Two Legs and Elaine, Patron Saint of Patience, accompanied by Cash (as in Johnny) the Dog.

Newberry Volcanic National Monument is home to a variety of wildlife, and I got a chance to photograph these denizens.

This grand show is eternal. It is always sunrise somewhere; the dew is never all dried at once; a shower is forever falling; vapor ever rising. Eternal sunrise, eternal sunset, eternal dawn and gloaming, on seas and continents and islands, each in its turn, as the round earth rolls.
– John of the Mountains: The Unpublished Journals of John Muir, (1938), page 438.

Cheryl Sets Out on a Journey

We’ll Always Have Paris (for Peter)