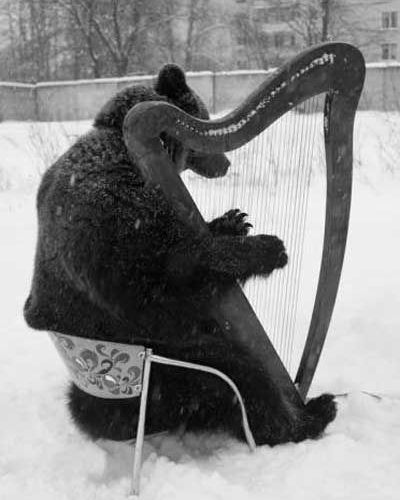 I wish I knew the story behind this picture (above). It went viral in Russia a little over a year ago, but it may be much older than that.

My story based on the picture is below. There is a bear in Gorky Park, one of the wild bears who used to be white – at least they were the night everyone saw them fall at once from the sky.

They were young spirit bears who hit the ground rolling and running, tumbling and fighting in the way brothers and sisters are said to do.

By dawn they were gone, out of the park, out of Moscow on their long migration cross-country to Siberia, where every year they were expected and greeted with a festival.

This particular year, Nikolo Rosso brought his family and traveling circus to Ludvo for the Spirit Bear Festival. They pitched their ragtag carnival outside town in the muddy tundra, creating a Spirit Bear Lane in such a way that the long line of homecoming bears would have to parade between sideshow tents, shooting booths, and open kitchen spaces.

The flame-haired Rosso women cooked seal meat and from spawn under the sharp eye of Old Lady Oleska Rosso on smoky little coal braziers. These delicacies they threw to the hungry young bears as they paraded by on the last mile of their journey to the Blackwater Sea.

They were young bears, and curious bears in those spring weeks of their migration, watched over by the great father and mother constellations Ursa Major and Ursa Minor.

One young bear did something the Spirit Bears really weren’t supposed to do, or at least never had done–he slowed down on the triumphant sweep through Nikolo Rosso’s little impromptu village to look around.

He stopped at Old Lady Oleska’s kitchen, and rather than snatching seal meat tossed to him on the run, he surprised her by sitting back on his haunches. He looked at her quietly.

She was a canny old traveler. She knew what to do because the legends and songs she had memorized when she was young told her this could happen and she must feed this suddenly special bear from her own plate.

And she readied the plate of meat, Oleska hummed. She heard a musical rumble and looked up in some surprise – the bear was humming tentatively with her. She furtively sign to Nikolo, who was doing a brisk business with the locals selling the dark hooch that gave the Blackwater Sea its name.

Out of the corner of his eye, Nikolo had been watching this bear sort himself out of the herd, and so he came cautiously over at Oleska’s motion.

“Musical bear,” Oleska whispered, and you can say she betrayed the bear who became known as Orpheus, or you can say she was just an agent of change, but a collar, some firm management, and Orpheus began a new migration with the Rosso family.

Oleska undertook his musical training. He learned to hum beautifully. In their own way, Oleska and Orpheus became friends, or perhaps she was more of a mother to him. He always had enough to eat. He was kept well-groomed as his while hair slowly changed to brown.

By day, he hummed to the villagers who came to see the traveling show, and by night his silver eyes glittered as he listened to the wild fiddlers play and watched the flame-haired girls whirl around the fire. He saw coins spin and saw the girls led one by one away into the dark of the canvas tents, but he was a bear, and none of this meant anything to him.

On one swing far to the south by the Georgian Sea, two new things entered the life of Orpheus: somewhere Oleska obtained an Irish harp, and it was she who taught him to play it.

The other wonderful thing that entered the life of the little traveling family was a new cart that Nikolo added to their caravan. This was a cart built all of glass with painted wooden shutters, so that it could be all closed up on the road.

Orpheus watched the construction of this cart with great interest. Everyone was excited, but he couldn’t figure out why. When the resident of this new cart was brought home, he was chained at the other end of the compound.

That night, Orpheus quietly slipped his collar, and in the warm moonlight of the South, he was like a large shadow moving down the backside of the tents, stepping carefully over all the guy wires, to the new cart.

Because it was warm, the painted shutters had been left down and the great glass aquarium was open to the moon and stars.

Orpheus, no longer the white Spirit Bear of his youth, but now an adult male in his rich, dark prime, stood on his hind legs to look into this marvelous thing, a tank of water. He could hear the faint motor of an aerator.

Orpheus felt his heart slow for moment when he saw the woman floating in the tank. He was afraid she was dead, the way her luminous green hair floated in the slight current. Then he saw the gills behind her ears fluttering rhythmically, and he understood she was just sleeping.

As he looked in, she came awake and looked at him with no alarm. He saw her tail then, its long, muscular length, green and silver in the moonlight.

Perhaps she looked sad; perhaps he felt happy, but Orpheus began to hum. The mermaid swam close and put both hands up to the glass to meet his enormous paws. Thus began a great friendship. Nikolo and Olesky and all the Rosso family realized this unusual love had thrown an aura of grace over there traveling show.

For years they prospered as the word ran out ahead of them of the musical bear and the mermaid. Orpheus played the harp, and the mermaid they called Rusalka would swim and tell stories with her hands and hips and eyes and graceful tail, stories of her own people, of the volcano goddess and the adventures of her younger sister and the handsome king they both loved.

No one understood her, but she danced her stories from the heart, and Orpheus loved her and told her so with this humming and his heart. Often when the moon was full, they would touch paws and hands together through the glass. He would hum, and she would sway gently to the night and the music of the bear.

These things happened long ago. Golden days go because golden days must; evil creeps out of the hills as raiding bandits. There are always betrayals, and beautiful things, if not violated, are taken away by night and released to a cold and foreign sea.

Orpheus never knew if Rusalka survived her return to the sea, but in his bear’s imagination, and in the power of his traveling heart, he held her and traced her difficult journey south ever south to warmer latitudes.

In his heart and mind, he felt when sharks would circle and held them back. He brought food to her by the power of care, and so she was sustained and nurtured until, in his mind’s eye, she was approached by others of her own kind and taken in, and she began a new life.

The carnival was in smoking ruins when he and Oleska escaped from the high-pitched screams of the bandits wheeling their horses through tattered tents with their long streamers of fire.

The two old friends wandered across the vast depths of Russia for a few more years. Orpheus would hum songs he learned from Rusalka, and the very very old woman would play the harp for seal meat and bits of bread.

One very cold night, the two slept curled up together. But in the morning, Oleska did not awake. Villages took her away and shooed Orpheus along. He began his long mindless rambling across the landscape.

One night, when he saw the lights of Moscow in the distance, he rested. By pale dawn light, he saw a long line of young white bears coming toward him. He watched as they passed by, then followed their trail in the snow back to Gorky Park.

As always, the people fed him there, and he hummed to the people and played his harp until they turned away with a sudden urgent anxiety for their loved ones. Mothers looked for their children and estranged lovers sought each other among the trees.

He played his harp in Gorky Park until his parents in the wheeling constellations of Ursa Major and Ursa Minor came around again. They looked down and heard him play until their hearts broke with pity, and they brought him home to take his rightful place among the stars.